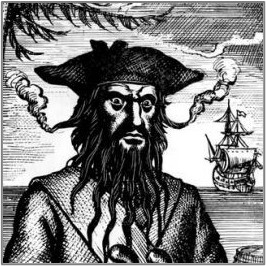 DID YOU KNOW that pirates sailed Outer Banks waters?

Piracy in the Outer Banks

Piracy has occurred off the North Carolina Outer Banks since the late 1500s. In 1585, English explorers came to the area under orders from the queen to set up a military colony to rob Spanish ships. Sanctioned pirates were later called privateers. During the last decade of the 1600s, North Carolina began to attract the attention of freelance pirates.

The Outer Banks was a perfect getaway for outlaws. Despite being off the beaten track, the waters offshore the Outer Banks grew into a well-used trade route due to the nearness of the Gulf Stream. Its speed allowed sailors to gain time on their voyage. It also brought in traffic for pirates to rob.

Shallow coast waters filled with hard-to-see sandbars also worked to a pirate’s advantage. Using boats that could sail through shallow waters, pirates could move through inland water ways to the sea, rob ships, and then move back to their island hideout. Larger vessels could not follow them without getting stuck on the sandbars, called shoals.

Remote areas also allowed pirates the chance to avoid large ports where they would be forced to pay taxes on their bounty. In isolation they could safely make repairs and clean the bottom of their ships. They would tip them to one side to scrape barnacles off the bottom. Such marine growth would slow the speed of the ship. This process was called careening.

The coast was sparsely populated during the late 1600s and early 1700s. Smuggling was considered a legitimate form of business. Pirates walked freely among the people. There was little form of government at the North Carolina coast. It became a safe refuge for the outlaws.

Maritime trade was not as extensive in North Carolina as it was for the settlers at Charles Town, South Carolina. Colonists enjoyed having the goods the pirates brought to sell. They also appreciated the money pirates spent.

In 1718, pirates fled to the North Carolina coast in greater numbers following the expelling of them in the Bahamas and New Providence by Captain Woodes Rogers, under orders of the king of England.

Stede Bonnet is a name that pops up as a pirate who appeared off the North Carolina coast during this period. Recorded history tells us that a pirate crew operating under the command of John Cole captured the ship, Expedition, October 29, near Hatteras the same year Rogers caused the mass exodus of pirates from New Providence.

The infamous pirate, Edward Thatch, aka Blackbeard, used Ocracoke Island as a hide-out. In November of 1718 he met his end when South Carolina’s Governor Spotswood hired two British war vessels under the commands of Captain Ellis Brand and Lt. Robert Maynard, with the intention of arresting Blackbeard and his crew.  The pirate and some of his crew were killed in a later battle at Ocracoke.