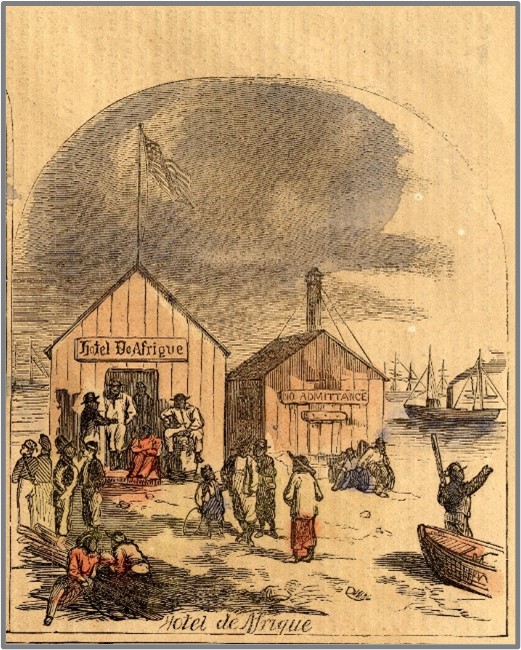 DID YOU KNOW that Hatteras Island was home to Hotel De Afrique, North Carolina’s first safe haven for African Americans during the Civil War?

The African American experience in eastern North Carolina was affected by the Civil War. Enslaved people fled to the region’s coast following the Union-won battles on Hatteras and Roanoke Islands. Seeking freedom, men came with their families to work as laborers, watermen, and soldiers. The Battle of Hatteras Inlet took place August 28–29, 1861. The Union fought the Confederacy to capture Forts Hatteras and Clark and control access to Pamlico Sound. It was the first Union victory of the Civil War. The Black gun crew of USS Minnesota played a role in the victory. Black and White sailors fought side-by-side. It was a pivotal battle that gained Union control of the sound waters supplying access to the mainland and, as a result, effectively eliminated blockade running and a crucial Confederate supply line.

Soon after the surrender of Forts Hatteras and Clark, Federal forces took control of the entire island.  Word of the Union victory reached enslaved people on Roanoke Island and the coastal mainland.  Almost at once, African Americans, who worked as watermen on coastal plantations, began arriving on Hatteras Island accompanied by their families.  By February 15, 1862, more than forty fugitive families lived there. They believed seeking refuge on Union-controlled Hatteras Island would guarantee their freedom. Some of the men served in the Union army.

One of the barracks was given as lodging for these families and was named Hotel De’ Afrique.  It was located near the beach at Hatteras Inlet.  A storm in early 1862 damaged this structure. A new campsite for refugees was built with 10 to 12 barracks. Despite these overtures, not all the White people at the site embraced the idea of equality of the races. Drunken soldiers caused unrest, which resulted in violence and the murder of a Black man. The soldiers only received a reprimand. Hotel De’ Afrique is considered the first safe place for people escaping slavery in North Carolina during the Civil War. Hotel De’ Afrique is officially recognized as part of the Underground Railroad Network to Freedom.