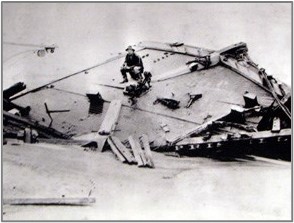 DID YOU KNOW that there are more than 2,000 shipwrecks off the North Carolina Outer Banks, dubbed the Graveyard of the Atlantic?

The Graveyard of the Atlantic

North Carolina’s Outer Banks are barrier islands that jut out into the Atlantic Ocean. Essentially, these migrating sandbars act as buffers between the mainland and the sea. A product of rising sea levels and storms, they barely protrude above the waters and exist in one of the most changeable and dynamic environments on the planet.

A variety of natural forces come together off these barrier islands where the Gulf Stream, rising from the south, and an extension of the Labrador Current, moving down from the north, meet. Historical shipping lanes followed these two currents, therefore reducing the length of their voyage. Winds blowing from the northeast or the southwest at Cape Hatteras form longshore currents that carry sand and deposit it at the Cape to form Diamond Shoals.

Storms, which form offshore, can produce strong winds and big waves that can move a ship onto these infamous sandbars. Shoals can extend 30-50 meters or more into the Atlantic. This geologic phenomenon creates a shoreline and lengths of unnavigable water that are difficult to determine from a distance. These shallow, sandy areas long have constituted an enormous danger to passing ships. Charting a course around or straight through them, crews gambled they could reach deep water before a storm broke. Summer and fall hurricanes as well as winter and spring nor’easters wreaked havoc on ships. Many a vessel had her sails torn out, mast snapped like kindling, and anchors dragged until coming to rest, like a sitting duck, on sand, or sinking into the sea. A ship perched partially on sand and partially on water and affected by powerful wind and waves bends in ways that are unnatural to its design and deadly to its passengers. Together shoals and storms have been the deathblow of many a vessel and sailor.

In addition to severe weather and navigational error, other human factors caused wrecks. Piracy and acts of war along the Outer Banks have accounted for hundreds of wrecks throughout our nation’s history. In both World Wars, German U-boats sank thousands of tons of shipping. Residents of Hatteras during World War II still recount the sight of the night sky filled with flaming debris of a freighter or tanker and its groan as it slipped to the bottom of the ocean. They remember shuttering homes so they would not become bright targets in the dark nightscape.