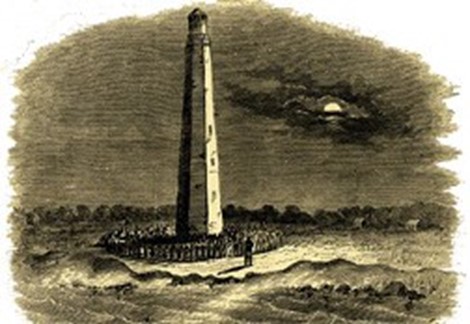 DID YOU KNOW that Hatteras Island was the site of the first Union-won battle in the Civil War?

The Civil War on Hatteras Island

On August 28, 1861, the residents of Hatteras Village awoke to the sound and sight of a Federal fleet anchored off their coast. Large naval guns of a Union fleet were firing on two Confederate forts under construction at Hatteras Inlet.

Forts Hatteras and Clark were relatively small earthwork forts. They were built by the labor of enslaved people and made of brush, sand, lumber, and peat. John Rollinson, a local resident of Hatteras Island at the time, wrote in his journal that the Confederate soldiers first arrived at Hatteras on May 9, 1861, one month after the Civil War began. Six Confederate regiments were assigned to guard over 400 miles of North Carolina coast. Under the command of William F. Martin, 700 men of the 7th North Carolina Troops were given the responsibility of protecting the forts at Hatteras Inlet.

The Confederate government of North Carolina authorized privateering (using privately owned vessels armed with small cannon) to seize Northern merchant ships off the coast. About a month-and-a-half before the capture of the forts, the ships running out of Hatteras Inlet had seized over 15 Northern merchant ships and their cargoes. The seizures caused the planned response by the Union Navy and Army. The attack was the first joint military operation of the Civil War. A Black gun crew on board the Union flagship Minnesota fired upon Fort Clark, providing the first deployment of Black troops to fire on the Confederacy in the Civil War.

The Confederate troops inside Forts Hatteras and Clark were unprepared for the assault. Construction of the forts was not yet complete. Several of the larger cannon were not in place or operational. When the Confederates returned fire, they were unable to damage the Union fleet as the limited size of their guns prevented them from reaching the Union ships. After hundreds of shells exploded into Fort Clark, it was abandoned. Troops in Fort Clark ran under fire to Fort Hatteras while Union forces, under the command of General Benjamin Butler, seized control of Fort Clark. The following morning, Fort Hatteras became the primary target. After approximately four more hours of intense fire, the white flag of surrender was waved. The Union had its first victory of the Civil War.

On the 29th of August, the fleet took up their positions at about the same range. At 8 o’clock, Susquehanna opened fire. Within a few minutes, the entire fleet concentrated its fire on Cape Hatteras. The Union forces on shore were in Fort Clark.  Fort Hatteras did not return fire for nearly half an hour. All its shots fell short. The bombardment continued without intermission. At half-past eleven, a white flag was displayed on the fort. The men at Fort Clark were met on the beach by a flag of truce. General Butler had entered the inlet on the steamer Fanny. He demanded an unconditional surrender. They held a council of war where the terms were accepted. —From Harper’s Weekly, August 1861.

This was a frightening time for the residents of Hatteras Island. The Union soldiers robbed their homes. The residents appealed to President Lincoln to bring an end to their mistreatment. The appeal was based on the fact that they had taken an “Oath of Allegiance” to the Federal government and were supporters of the U.S. Constitution. Several families had their wives and children hide in the woods until they could find out the treatment they would receive from the Federal troops. There was a severe risk in taking the oath. If the Confederates recaptured the island, then all who took the oath would be treated as traitors. This threat resulted in most of the local men on Hatteras Island joining the First North Carolina Regiment (a Union regiment formed by command of President Lincoln). The incentive for joining was both the protection given by the Federal government and the pay that gave a regular source of income.

In addition to the First NC Regiment, the Union command also assigned many other Union regiments to Hatteras Island. This was to aid in protecting against any possible attempt by the Confederates to retake the island. The local families were used to the limited availability of good drinking water, mosquitoes, biting flies, ticks, red bugs, and wind and humidity.  But the Union troops viewed Hatteras as an unhealthy place to be assigned. To cope with the isolation and loneliness, the soldiers sought social interaction with the locals. One man from the 48th Pennsylvania Regiment recalled dating some of the Fulcher and Ballance women. Another Union soldier wrote of poling a boat from Hatteras to Trent (Frisco) to be part of a “molasses boiling party” where they made “pull candy.” He said:

“But we wanted to see a molasses-boiling, and we ‘went-in’ considering ourselves welcome, of course, and there, sure enough, were the girls done up in their prettiest, and there were a couple of old women and several children and the ‘old man of the house,’ all gathered up in two corners, on either side of the chimney, and there was an industrious young lady stirring a kettle of ‘mozy.'” (Source: Forty-Eighth in The War, by Oliver C. Bobbyshell, p. 25.)

Other Union soldiers occupied their time by learning how to fish from the local fishers. One described shark fishing from the beach, using a hook fashioned from a bucket handle attached to a coil of line and a large chunk of horse meat.

The fear of an attempt by the Confederates to recapture Hatteras Island proved to be a valid concern with an incident that occurred in early October 1861. It was known as the “Chicamacomico Races.” Members of the Confederate 7th NC Troops, able to escape when Forts Hatteras and Clark fell, made their way to Roanoke Island. There they joined members of 3rd Georgia Troops to train and prepare for an attempt to recapture Hatteras Island. The effort began at Camp Live Oak near present day Rodanthe and met with initial success. It soon collapsed however when the Confederates were unable to get the necessary troops ashore due to shallow water. Also, reinforcements came up from Hatteras, and with the help of the Federal gunboat USS Monticello, forced the Confederates to retreat to the north and abandon Hatteras Island once and for all.

The Federal Government realized that by controlling Hatteras Inlet they would be able to control most of the inland waterways and capture strategic Confederate strongholds. They also could threaten the vital Confederate supply line to the main concentration of Confederate troops in Virginia. This supply line was the Wilmington-Weldon Railroad.

In January 1862, Union General Ambrose E. Burnside led a large fleet of Union ships from Fort Monroe in Hampton, Virginia. As they sailed south towards Hatteras, they encountered a severe winter storm. The fleet of more than 60 ships tried to sail through Hatteras Inlet. Some went aground and were smashed to pieces by the waves. Many others waited at anchor for their turn to navigate the inlet. But they too were damaged as they collided with each other and the shore. Men, horses, and equipment were lost. But enough ships made it through the inlet to eventually sail up the Pamlico Sound and capture Roanoke Island. As a result of Hatteras Inlet falling into Union hands, the inland waterways, as well as strategic locations such as Roanoke Island, New Bern, Washington, and Plymouth, came under Federal control. Men from this state serving in North Carolina’s regiment with Confederate forces in Virginia were demoralized and distracted by the thought of Union forces in control of large sections of the eastern part of their home state.

The Civil War action on Hatteras Island was significant, not in terms of numbers of troops, duration, or loss of life, but in terms of weakening Confederate morale and posing a threat from deep within Confederate territory itself. It also supplied a much-needed boost to the Union cause in 1861, since up to the attack at Hatteras the Federals had experienced nothing but defeat.  (Source: Drew Pullen)