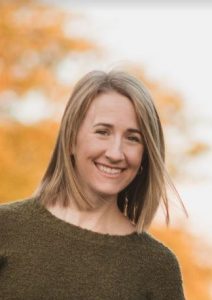 A love of history combined with a formal education in writing helped contribute to the winning entry in a folklore writing contest hosted by the Graveyard of the Atlantic Museum in Hatteras.

Hannah Bunn West won the inaugural contest with her entry, “Salvaged from the Storm,” which the judges unanimously voted as the top submission.

The short tale creates a fictional new life for Theodosia Burr, who was the daughter of Vice President Aaron Burr. Theodosia Burr was traveling from South Carolina to visit her father in New York when Patriot, the schooner she was on, was lost at sea in 1812. Theodosia was never seen again and presumed drowned.

But Bunn West offered an alternative storyline for Theodosia Burr.

“(I like) to imagine that she too made it to our shore where she chose to start a new life,” Bunn West wrote when describing the factual inspiration for her fictional tale.

Bunn West is a native of the Outer Banks who lives with her husband and two children in Kill Devil Hills. She studied creative writing with a concentration in non-fiction at the University of North Carolina Wilmington, where she also earned her teaching degree, according to a submitted biography that also notes a passion for history. She is currently writing her first book, which focuses on notable women of the Outer Banks.

The museum’s folklore writing contest accepted original submissions of fiction that speak to the feel of the Outer Banks. Bunn West’s entry was one of two inspired by the loss of Theodosia Burr and the schooner Patriot. Others were built around the legend of the pirate Blackbeard, ghostly experiences and even childhood mysteries that lost their magic when discovered to be the mundane.

The judges rated each entry on a scale of one to five in each of three categories: creativity, the Outer Banks connection and writing proficiency. For submitting the winning entry, Bunn West will receive $100 and a membership in the Friends of the Graveyard of the Atlantic Museum.

Salvaged from the Storm

The old woman’s eyes shone in the flickering candlelight, even through a cloud of cataracts. Her body was still and stiffening but her dark eyes still held light, magic, and movement. She cast them toward a painting hanging on the wall of the cottage, a simple structure that was sparsely furnished with bare floors but sturdy against the salt air and battering winds of the Outer Banks. The doctor, from Elizabeth City, hadn’t noticed the painting when he arrived at the ailing woman’s bedside but he followed her gaze there now. Staring back at him was the portrait of a young woman. She looked to be of high society, with fair skin, raven hair and eyes just as dark. Eyes that looked subtly wary of their painter, shoulders that looked elegant, but burdened. She seemed poised to turn and run at a moment’s notice if needed.

“How did you come by such a fine portrait?” the doctor asked the old woman softly. She let out a rattling sigh. “I don’t mean to offend,” he corrected. “But I’ve not seen such a thing in Nags Head in all the years I’ve called in.”

The old woman closed her eyes. She could feel the doctor’s hand at her neck after a moment, to find her pulse. She could feel the sting of the wind-driven sand on her face and the incredible roar of the breakers that had delivered her to shore all those years ago. She had heard the shore beckon her, whisper to her of escape and had known in that moment that she would leave everything else behind: the wreckage of the Patriot now sinking to its grave in the Atlantic, the plantation in South Carolina, her role there as a governor’s wife, her reputation in the young country as a vice president’s daughter. Even her name, Theodosia Burr, she would abandon.

She would keep only this: the memory of her young son, lost to malaria, and the aching void it left in her heart. She laid on the shore, her chest heaving from the battle it had just done with the sea. It rose and fell with the swelling and deepening of the void, the ebb and flow of the waves. She had hoped the sea might take her, but there she lay, flotsam among the foam.

Just then another wave attacked the beach and left in its bubbling wake an object that looked dark and rectangular in the gloaming. Theodosia peeled herself from the sand and staggered over to retrieve it. It was the portrait she had intended to give to her father when she arrived in New York. She stared at her likeness in the oil painting and couldn’t decide if she knew that woman or not. What she did know now is that that woman would never make it to New York, nor would the painting. She tucked it under her arm and looked toward the sandy expanse to the west. She could see a few scrub oaks and a dark line of trees along the backside of the island. It called to her and, bracing against the wind, she trudged there in reply.

Opening her eyes, she was met with the doctor’s kind face still keeping vigil at her bedside. Her own face had relaxed with the memory of her journey to this place. Her life had been good because it had been her own. She raised a frail hand and gestured toward the painting.

Theodosia Burr was the daughter of vice president Aaron Burr, who famously killed Alexander Hamilton in a duel. She was raised to be highly educated and spoke several languages, but went on to fulfill a traditional female role and married a southern plantation owner. Suffering a depression after losing her young son to malaria, in 1812 she boarded the schooner Patriot in South Carolina to visit her father in New York. It was lost at sea and she was never seen again. Several decades later, a doctor from Elizabeth City was attending a patient in Nags Head who gave him a fine oil painting as payment. The doctor thought the portrait bore the resemblance of Theodosia Burr. Legend has it that the painting made it to shore after her ship sunk off the coast and she was drowned or after it came into the path of pirates and she was made to walk the plank. This author likes to imagine that she too made it to our shore where she chose to start a new life. 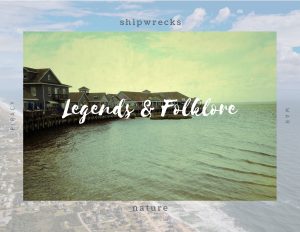 The museum is hosting a legend and folklore writing contest and seeking original works of fiction that speak to the feel of the Outer Banks.

As lovers of this wonderland, you have experiences or knowledge about its history that, with a dose of imagination, can become a captivating story.

With a history soaked in shipwrecks, war, piracy, storms, nature, and beauty, there is much to build upon. The Outer Banks of North Carolina is rich in legends and folklore that, though fictitious or not always provable, often have a grain of truth.

For the sake of this contest, we are using these definitions:

Legend:  a story coming down from the past especially one popularly regarded as historical although not verifiable.

Folklore: an often unsupported notion, story, or saying that is widely circulated such as a tale.

Using these legends and folklore for inspiration, the writer creates a story that feels real; therefore, doing background research or writing from experience can further that goal.

Entries can be no more than 800 words. The entries will be judged on creativity, writing proficiency, and how the work relates to the Outer Banks. The contest is open to people ages 18 and up who have yet to publish a work of fiction.

Deadline to enter is April 1, 2021. The prize is $100 and a membership to the Museum. By submitting an entry you agree that the work may be posted on our website. There is no entry fee. One entry per person. All entries must be accompanied by the entry form. You can submit your entry electronically below, or you can download the entry form here. Please write clearly so we can read your contact information. Email entries and forms to maryellen.riddle@ncdcr.gov or mail them to Mary Ellen Riddle, P.O. Box 191, Hatteras, NC 27943. Mailed entries must be postmarked by April 1, 2021.