Posted at 14:45h in Graveyard of the Atlantic Updates by NCMM Hatteras Staff
0 Likes 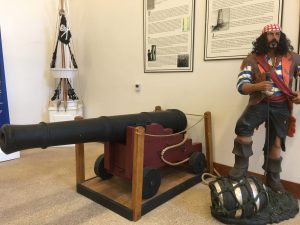 HATTERAS, N.C. — An infamous pirate has once again staked claim to land along the Outer Banks.

The North Carolina Maritime Museum in Beaufort has installed its traveling exhibit on Blackbeard and his flagship Queen Anne’s Revenge in the Graveyard of the Atlantic Museum. The display, which includes a collection of artifacts recovered from the QAR shipwreck site, will remain at the museum through at least the end of August. It is then scheduled to move to the N.C. Museum of History in Raleigh.

“The exhibit is a story that covers the discovery and archaeology of the wreck of the Queen Anne’s Revenge,” the museum system’s Exhibits Curator Mike Carraway explained. “It also 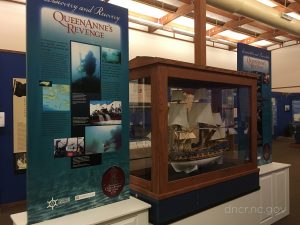 covers the pirates themselves in relationship to QAR and Blackbeard.”

The approximately 40 artifacts in the traveling exhibit have been recovered from the underwater home of the Queen Anne’s Revenge. Intersal, Inc., discovered the shipwreck in

This is the second iteration of the traveling exhibit and one that adds more items to the display. 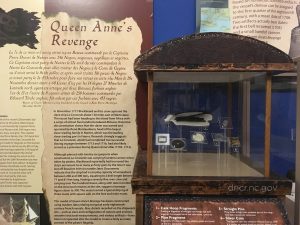 “And we changed the way the artifact cases are set up,” Caraway said.

That way, he explained, they can tell the story through artifacts that reflect the panels on such topics as the legend of Blackbeard, piracy at that time, common weaponry, treasure and the discovery of QAR. Artifacts include lead shot and cannonballs; a pipe bowl; ceramics; fragments of gold; and more. A touch screen provides information on Blackbeard’s crew; a model of QAR that Carraway describes as more historically accurate than even the one in the permanent exhibit on display at the museum in Beaufort, N.C.; and a map of QAR’s underwater home are also included.

It was hard for Carraway to single out a favorite artifact or element of the display.

The Graveyard of the Atlantic Museum is located at 59200 Museum Drive in Hatteras. We are currently operating on our summer schedule: open Monday through Saturday from 10 a.m. to 5 p.m. Admission is free. For more information, call 252-986-0720.